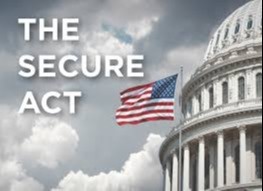 The Secure Act was passed into law by Congress in late 2019 and took affect January 1st 2020. This act changed many rules regarding retirement accounts, most notably how Beneficiary IRAs are to be treated. This blog will summarize these changes and clarify some of the more ambiguous aspects of the new law.

Previously, designated beneficiaries inheriting an IRA were able to stretch required minimum distributions (RMDs) over their lifetime using what is called "life expectancy payments (LEP). The Secure has now changed this and introduced a 10-year withdrawal period instead of the lifetime stretch for these individuals. However, not all individuals are subject to the 10-year rule and some of those that are will still have a RMD, per new rules issued by the IRS.

A Non-Designated Beneficiary is a non-person beneficiary that includes charities, a person's estate or a "non-qualified" trust. The Secure Act did not change the rules for this type of beneficiary. If the deceased died prior to the required beginning date (now set at 72 by the Secure Act), then all distributions must be made and the account emptied by the end of 5 years following the year of death. If the IRA holder passed away after their required beginning date, then the beneficiary must take RMDs based on the deceased's life expectancy under the IRS's Uniform Lifetime Table. Again, these are the same rules as prevailed prior to the Secure Act.

An Eligible Designated Beneficiary consists of anyone who is either a spouse, a disabled individual, a chronically ill person, a minor child, or an individual who is not more than 10 years younger than the account owner. Certain trusts created for the exclusive benefit of disabled or chronically ill and "See-Through" trusts are also included. For these beneficiaries, the Secure Act, again, did not change the rules from those that existed previously. These beneficiaries can stretch the inherited IRA RMD's over their lifetime using LEP, as determined by the IRS Life Expectancy Table.

The Secure Act's major impact is on the last of these three categories: Non-Eligible Designated Beneficiaries. These beneficiaries are those that qualify as a "Designated Beneficiary" but not included under the definition of an Eligible Designated Beneficiary and will typically include children of the deceased, friends and other family members. Whereas these individuals could previously stretch the inherited IRA RMDs over their lifetime, the Secure Act changed the period in which distributions come out to the "10-year rule". Based on wording in the Act, it was initially thought that distributions could be taken at anytime and in any amount so long as the account was emptied by the end of the 10 year following the decedent's death.

In early 2021, the IRS issued guidance that there would, in fact, be RMDs each year during the 10 year period. This guidance, however, failed to take account of changes under the Act so in May, 2021 they reversed themselves and provided guidance  that there would be no RMDs during the 10-year distribution period. Finally, in February, 2022, the IRS released Proposed Regulations that clarify the question of RMDs during the 10-year period and several other matters.

The proposed new rules state that if the IRA owner died prior to their required beginning date (i.e.72). then the IRA account must be emptied by the 10th year following the year of death and there are no RMDs during that 10-year period. However, if the IRA owner dies after the required beginning date, then the 10-year rule applies AND the beneficiary must take RMDs during years 1-9 based on their life expectancy using the IRS's Life Expectancy Table based on the beneficiary's age in the year following the year of death.

By the way, the IRS proposed regulations also defined a minor child as an Eligible Designated Beneficiary until their 21st birthday, at which point they would be required to follow the 10-year rule as well as take RMD's.

Status:  A public hearing was scheduled for June 15th to receive comments on the new proposed regulations. It will then take several months for the IRS to finalize and publish regulations, which may appear later this year or sometime in 2023. In the meantime, the IRS has guided that for 2021 (and perhaps for 2022 as well), taxpayers must apply the existing regulations and exercise a “reasonable, good faith interpretation” of compliance with the SECURE Act. They state that plan administrators and individuals may satisfy this requirement by following the guidance as outlined in the proposed RMD regulations. For those Non-Eligible Designated Beneficiaries who may not yet have taken an RMD for 2021 or 2022, it may be wise to consider doing so very soon.

This is meant for educational purposes only.  Information presented should not be considered investment advice or a recommendation to take a particular course of action.  Always consult with a financial professional regarding your personal situation before making any financial decisions.